Firstly I’d like to thank everyone for all their messages of love and support. They mean so much to me at a time like this. They really do keep me going so please keep them coming. They are also a great distraction and allow my mind to stop racing so much. Thanks to those who have sent flowers and gifts also. And while I’ve got everyone’s attention I’d also like to thank everyone for their messages and gifts after Polly was born. I feel terrible that I haven’t yet sent written thank you cards with a lovely photo of Polly as a newborn. I will get around to it but maybe not in the near future. Here’s a photo of Polly only 7 days old. 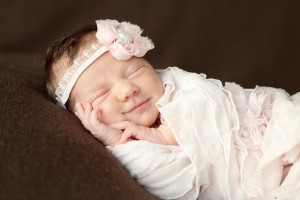 The last few days have been extremely difficult for me. After playing the waiting game from Friday to Tuesday morning, I called again to chase up my results after lunch on Tuesday. I still had an appointment booked for further core biopsies at 2:30pm on Tuesday and I needed to find out if I had to make it up to Rocky for it. I was told that the Radiologist did want to do more tests before writing up the report from the MRI. So up we went again, Derek, Polly and I.

I had mammograms done on both breasts, just as a comparison (although the thought did cross my mind that if they started focusing in on the right breast I’d start to freak out a bit!). The Radiologist decided at that stage he didn’t need to do a further scan or core biopsies, he had enough information to finalise his report. Right breast is all clear, thank goodness.

Once again, the news wasn’t good. To go with my invasive breast cancer (which is approx 1cm), there is also a large area behind the 1cm tumour which is approx 6cm long from nipple running upwards. The Drs are confident that this is DCIS – ductal carcinoma in situ. DCIS is the name for abnormal changes in the cells in the milk ducts of the breast. ‘In situ’ means in place. DCIS is a non-invasive breast cancer. The abnormal cells are contained inside the milk ducts. Just so you know the difference, early breast cancer is invasive cancer that is contained in the breast and may or may not have spread to lymph nodes in the breast or armpit. Some cancer cells may have spread outside the breast and armpit area but cannot be detected.

Anyway, because of the size of the DCIS compared to my relatively small boobs, it has been recommended that I have a mastectomy rather than a lumpectomy (or breast conservation surgery). The Drs feel that if they do a lumpectomy my nipple will be pointing upwards instead of outwards and the chances of having to go back in for a mastectomy soon afterwards are pretty high. This is because when they do a lumpectomy, the pathology report needs to show clear margins on the tumour(s) they remove. Clear margins mean there can’t be any cancer cells on the outside of the tumour. If there aren’t clear margins, it’s straight back to surgery for a mastectomy. They can see from the MRI and mammogram that the DCIS area is quite large. I can actually feel the DCIS as well as the smaller tumour, and I know there is no way they could do conservation surgery and come out of it with anything that looked “normal”.

So I have decided to have the mastectomy and the decision certainly doesn’t come down to the cosmetic side of things. It’s because I’m shit scared of the cancer returning in the same breast. At one point I was even thinking take the other one too! There is a gene that can be tested for called the BRCA2 gene mutation. If someone has this gene then there is a 70% chance of cancer returning to the second breast and also a higher risk of ovarian cancer. I’ve been told the BRCA2 gene mutation test costs $1000s to be tested for and because I don’t have a strong family history it’s very unlikely I have the BRCA2 gene mutation. This is something I’m still considering being tested for though. Did you know that the chances of a woman developing breast cancer (in Australia) is 1 in 9? Another interesting stat is less than 5% of all breast cancers are caused by a family history. So it’s pretty obvious to me that most of the women who develop breast cancer over their lifetime do not have a family history. And here I was thinking that it was unlikely to ever happen to me because I don’t have a family history. If I knew this stat before I may have been more vigilant in keeping a close eye on my boobs! As scary as it is, it’s something to think about girls. How about you all do a self examination tonight and next time you’re at your Drs, ask them to do a check for you. People keep asking what they can do for me, please do this for me. At this stage I don’t know if they have caught mine early but obviously the earlier this horrible disease is caught, the better.

More information from my core biopsy last week is that the tumour they took a sample from is HER2 positive. This is good and bad. Bad because it’s a more aggressive form of cancer but good because they can now treat it with hormone therapy. I’ve been told that they consider most cases of breast cancer in women of my age to be aggressive. So, my cancer is hormone responsive and it most likely occurred during pregnancy when my hormones were going wild, estrogen in particular. The tumour is estrogen receptor positive. What worries me is that it started during my pregnancy with Rosie. What if it has been going on for this long? That’s a thought that would keep me awake at night if I wasn’t so tired…

At this stage surgery is booked for Monday 27 August. I have been extremely lucky to be able to talk to two amazing women over the last few days. One is an old touch football friend who has had breast cancer, a mastectomy, chemo, another mastectomy and more chemo plus a double reconstruction. It was scary talking to her about what’s ahead but also empowering at the same time as it helps me prepare myself mentally for what’s to come. One thing that will stick in the forefront of my mind is when she said, “Don’t fight the situation as it will just make it worse”. I think about giving birth to Rosie and Polly and how I didn’t fight the pain. I managed two labours with no drugs, not even gas. This is because I went into both with a mindset of not fighting the pain but working through it and knowing that I could do it. Mind over matter worked for me then and I’m sure I can make it work for me in my current situation.

The second woman I spoke to is a family member on Derek’s side who just happens to be a Gynaecological Oncologist (I think that’s right!). She has offered to look over my test results at each stage and also answer any questions I might have. She gave me a lot of information and once again I feel knowledge is power, even if it scares me at the moment. It’s like having a second opinion but even better 🙂 Both women have given it to me straight which I appreciate. No use pussy footing around.

Emotionally I have been up and down over the last week as I may have mentioned earlier this week. After the news on Tuesday I had a very down day on Wednesday. I’ve been to see my GP twice since receiving my diagnosis last Thursday and she has been fantastic. One thing she said today described exactly how I’ve been feeling. I’m like a duck floating along on the water, I might come across calm and strong on the surface but underneath I’m paddling like mad to stay a float. I have a feeling of anxiety that just won’t quit which is making it hard to eat (I know right! Not much suppresses my appetite.) I’ve already lost 2kg and I’m sure I’ll lose more, especially during treatment. This is obviously of concern because where is it going to come from?! Derek has also lost 4kg so the stress of the situation is affecting us all. Trying to wean Polly is stressful in itself, she’s not taking the bottle as easily as I thought she would. I have had offers of donor breast milk from friends and I am seriously considering it but I’m finding it hard to make a decision about that at the moment. This might be something to work out after my surgery. Polly had her 4 month needles today and hasn’t been herself this afternoon plus she’s still getting over her bronchiolitis so not exactly the best time to be weaning her from the boob and breast milk.

Rosie is probably doing the best out of all of us at the moment. She does seem to know something is happening but is getting on with things. She’s always been a little obsessed with my boobs so it will be hard explaining to her that there is something bad in my left boob so it has to be removed. Finding the right words is going to take some thinking. Any suggestions are welcome! I try not to use good/bad and like to use other words but that is often harder said than done.

Anyway, it’s late and I need my rest. I find if I go to bed exhausted, it’s easier to get to sleep and my mind doesn’t race as much. I’ve always been a night owl anyway, I doubt that will ever chance, no matter how much I’d love to be an early bird 😉